Python vs. Ruby: How to Choose the Best Language For Your Project

Python and Ruby are two popular languages, and it's always a question of which one to choose for specific software development tasks. Amoniac has considerable experience working with both languages, and we can share the pros and cons of each. This article will outline the features and advantages of both languages and discuss the differences between them. Also, you will learn how to choose the best programming language to fit your project needs. 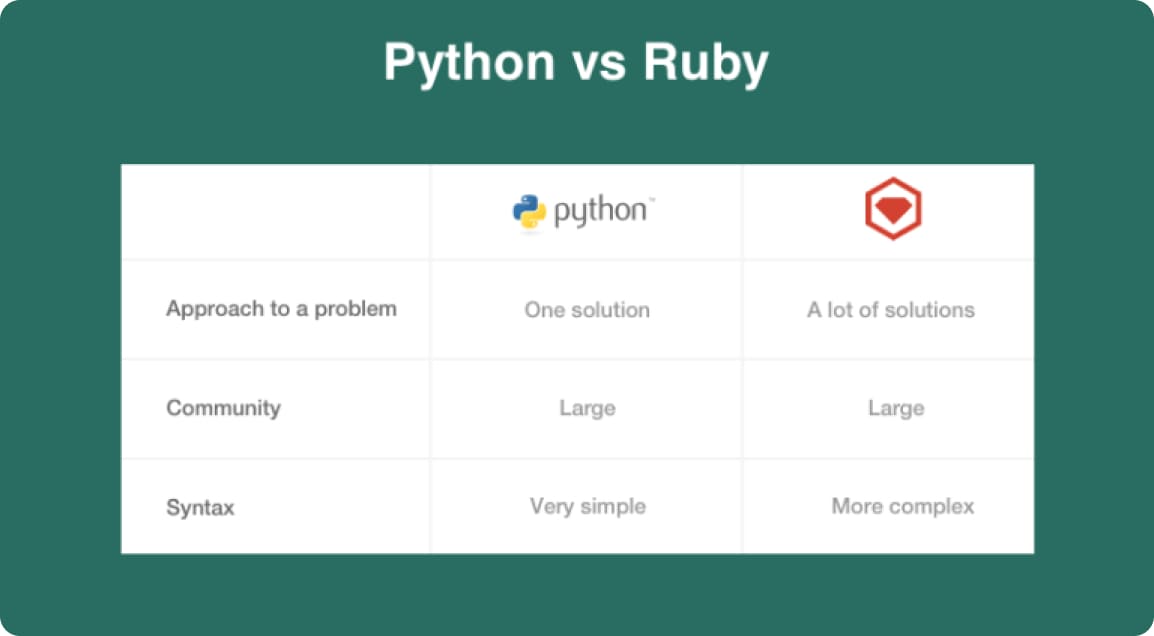 Why Choose Python: Features and Advantages

Let's start our language overview with Python. It is a high-level object-oriented language with a diverse community around it. Moreover, Python is one of the fastest languages for programming, as it requires very few lines of code. It was developed in 1991 and inspired by such languages as C/C++, Java, Perl.

Moreover, a lot of companies worldwide use Python on an everyday basis. Among them are Google, Youtube, and Dropbox. It is essential to add that this is one of the best languages for beginners, as it is not difficult to learn, and there are a lot of compiled guides and strong community support for learners.

Furthermore, many features of Python underline its advantages in Ruby vs. Python discussion. Here are some of them:

It is not a complete list of Python features, but we define the most important ones. It is essential to mention that Python is a more distributed language, but it does not mean that it is better than others, and it means that it is easy to learn.

Why Choose Ruby: Features and Advantages 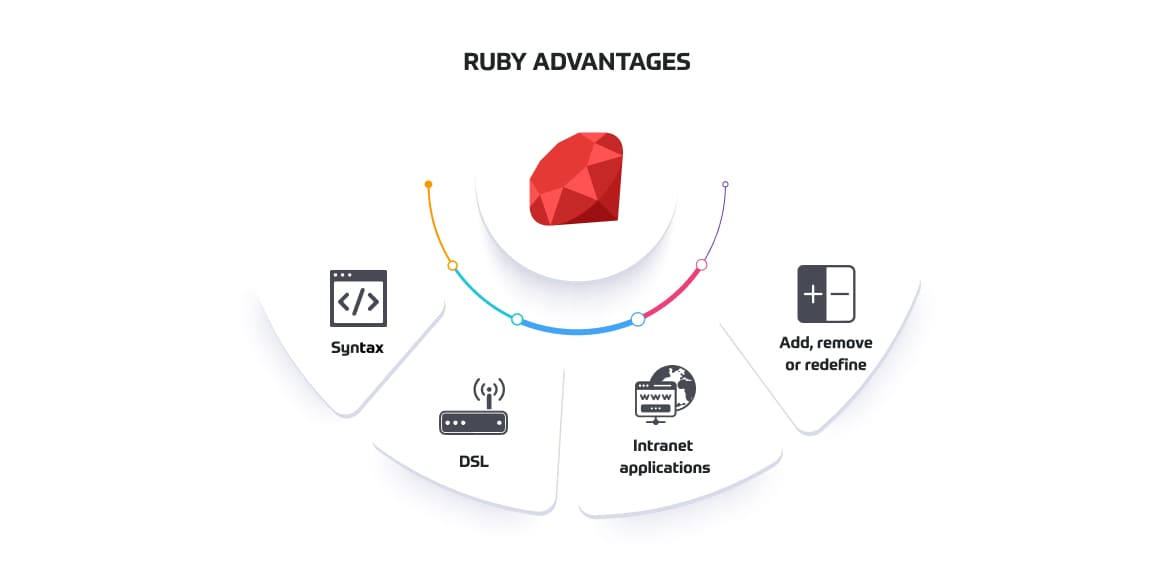 After discussing the benefits of using Python, it can look like it won in the Ruby vs. Python comparison. At the same time, different languages can be used for achieving different goals.

Ruby was created in 1995, and its primary purpose was to make coding more natural. The idea of Ruby is to generate the code for people first and only after that for computers. It is a pure object-oriented language that can be run on all platforms. Nowadays, it is mainly used in the Ruby on Pail framework, which is very popular for developers. Such prominent companies use Ruby as Airbnb, Github, and Twitter.

Ruby also has a list of features that make this language competitive and introduce many of its advantages:

What Is The Difference Between Python and Ruby?

Speaking about language features, we already briefly mention a few critical differences between them. At the same time, there are other important points to consider before choosing the best language for your project.

Here are the fundamental differences between Ruby and Python and specific issues of each language:

How to Define The Language For The Project?

As you can see, there are a lot of technical advantages and disadvantages for each language for backend development. Each time you choose the best language for the project, you need to outline the goals and specifics. Then you can make a decision based on what features you will need more. For example, it would be easier for beginners to start with Python, but at the same time, Ruby on Rails can have faster performance. If you want to add such features as machine learning, you probably will work more efficiently with Python. When choosing the language, you need to start with "Why" and "What I want to get at final."

The article delineates the essential advantages of Python and Ruby for backend software development teams and points out the differences in coding each of them. At the same time, there are no unique answers on what language is better to use. If you want to discuss your case with proficient developers, you can contact the Amoniac team.

How Scrum Works And Why You Should Choose It

How Scrum Works And Why You Should Choose It
Share: